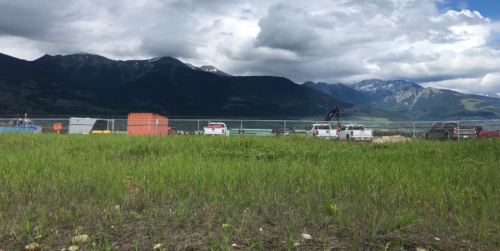 – We were momentarily detained by the RCMP –

Minutes after making a video in front of a Trans Mountain Pipeline depot we were pulled over and detained for 10 min by the RCMP.

This type of harassment and intimidation of pipeline opponents and indigenous people by police officers is a common practice. I have been aware of it for a long time and have now experienced it firsthand.

While pulled over the officer asked Raymond if the car was stolen, asked what we were doing there, why we were in possession of two particle filter masks that we used for the tar sands. He stuck his head into the car and asked us several times both directly and indirectly if we were opposed to the Trans Mountain pipeline. I suppose that if we had said we were that our names would be entered into a government database of some sort.

Despite the fact that we had not committed an infraction, the officer repeatedly asked that I provide ID despite the fact that Raymond was the one driving the car. When I exercised my right not to provide ID under these circumstances, he insisted and told me that we were both under detention. After asking twice what I was being detained for he could not come up with an answer and pointed to a sign posted in front of the pipeline camp that indicated that the fenced-off facility was private property. At no time had we even come close to touching this fence. Raymond told the officer that the no-trespassing sign was directly in front of the main entrance to the camp and in no way indicated that the road itself was private. We knew what we were talking about because we had made a point of checking the signs on the way in.

The police should not be deployed to harass every environmentalist who wants to take a few pictures of pipelines segments stacked up at a publicly funded construction site! The Trans Mountain pipeline project is not private, it’s a public project financed by our tax dollars through the federal government. Anyone who wants to peer through the fence should be able to do so without being identified, detained and harassed by the RCMP.