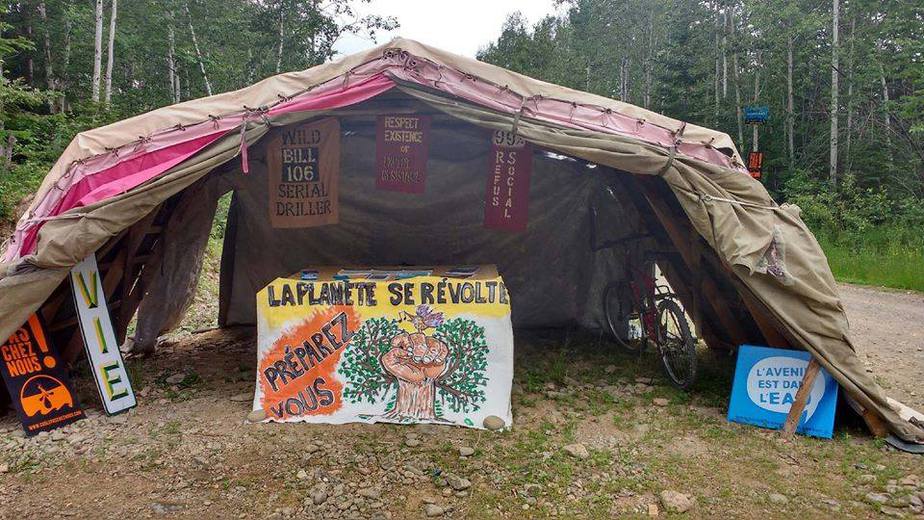 I’m on my way to Gaspésie to join the solidarity camp against the activities of the oil company Junex!

Within the next few weeks, Junex and a government fund for the development of NON RENEWABLE resources (named Resources Québec) are getting ready to drill the Galt 6 well potentially requiring hydraulic fracturing.

The oil company recently received generous compensation of $5.5 million from the Couillard government, which chose to protect Anticosti Island and cancel the drilling contract signed by the Parti Québécois a few days before the 2014 election.

In early August, the oil company Junex announced that they will use their $5.5 million to go ahead with their drilling in the Gaspé Peninsula. The Quebec government has made an additional public investment of $8.4 million in this extractivist project. This announcement provoked a roadblock by various unnamed environmentalists who oppose the project and prevented access to the drilling site for a few weeks before the police dismantled the barricades. A Carleton University student was arrested in connection with this operation.

The solidarity camp where I will be spending the weekend was set up to support the barricades and it has been going on ever since. A demonstration is also planned in downtown Gaspé on Monday.

Although the oil company denies that hydraulic fracturing is being considered for Galt 6, they say that this technology has served them well in the case of Galt 4 well, located in the region. It is very likely that the soil under Galt 6 will be injected with toxic products and fractured to recover a few barrels of oil.

Every effort must be made to block these drillings and the use of hydraulic fracturing on Quebec territory. I invite the public to support the environmental groups involved in this issue with your support, your presence and your donations. The town of Restigouche (located nearby) is also facing a 1.5 million dollar lawsuit from the Gastem company, because they have adopted a bylaw to protect their drinking water! The lawsuit will begin in September and they need your support!

I will keep you informed throughout the weekend!