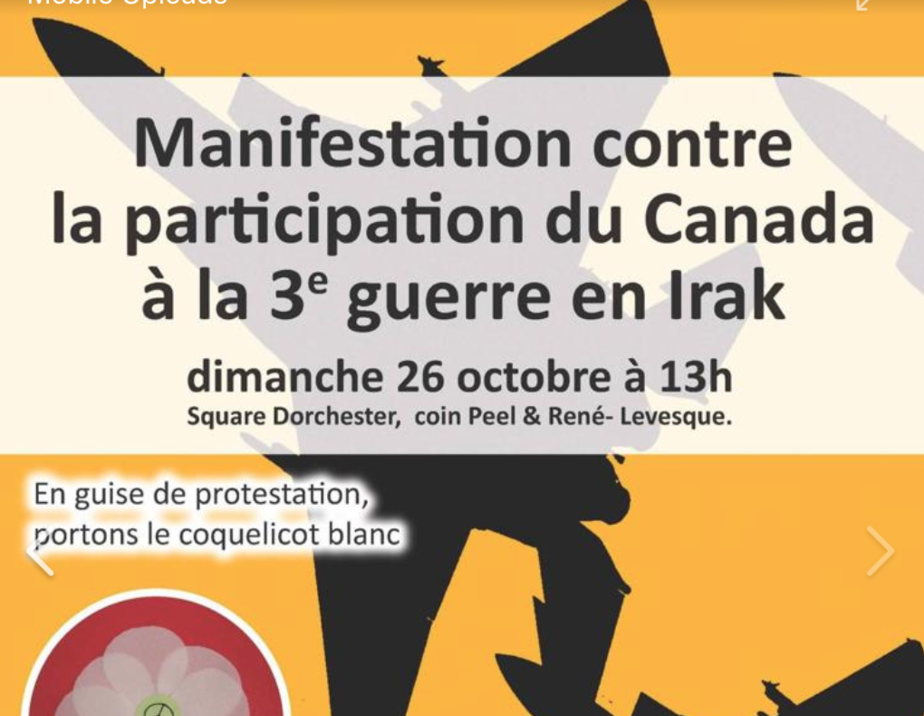 The time to stand for peace is now! This weekend let’s have are voices heard; Canadian troops have no business in Iraq.

Earlier this week I was interviewed by Michelle Lalonde of the Montreal Gazette:

“Alex Tyrell, leader of the Quebec Green Party, said the peace demonstration could not be better timed, and he will participate, wearing a white poppy to express his opposition to these two incidents being used to justify Canada’s military action in Iraq.

He said he is outraged that the police investigations into this week’s events had barely gotten underway before Prime Minister Stephen Harper and others were characterizing them as “attacks on Canadian values”.

“This is the same kind of rhetoric that got us into Afghanistan,” Tyrell said, adding the two incidents may be the acts of mentally ill individuals who were influenced by violent hate speech on the internet.

He says that instead of “beating the drums of war”, Harper should be investing in the care and treatment of the mentally ill and doing more to restrict access to guns.”

As Canadians struggle to express their outrage at the killings of two Canadian soldiers this week, debates about symbols, like poppies and uniforms, are raging. Some callers to radio call-in shows …

The time to stand for peace is now! This weekend let's have are voices heard; Canadian troops have no business in Iraq….