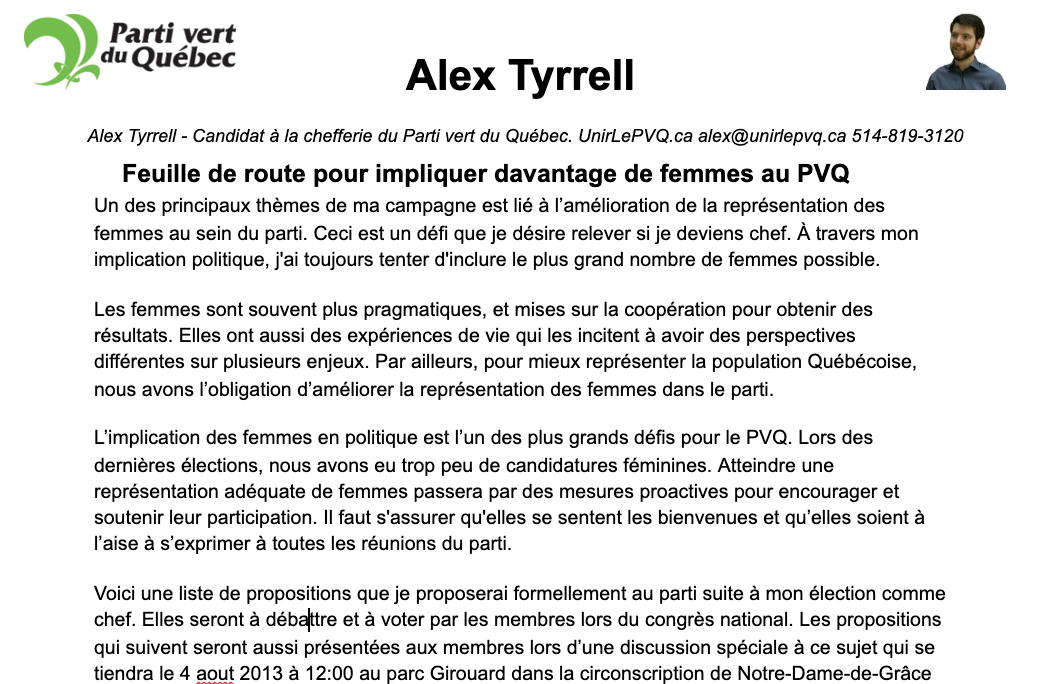 One of the main themes of my campaign is to improve the representation of women in the Quebec Green Party.

Here is a list of proposals that I will formally propose to the party following my election as leader. They will be debated and voted on by the members at the National Convention.

1) Reform the way meetings are held, and group exchanges to promote speaking tours in an atmosphere of mutual respect and professionalism.

At the Green Party, it is high time to establish mutual respect among activists and professionalism in exchanges. It is for one of these main reasons that I present myself as the candidate to unite the party.

Often, our group discussions and interventions are aggressive and it is often the one who speaks the loudest that succeeds in getting his or her message across. This type of environment can sometimes prevent women from expressing their views.

The shadow cabinet is one of the most important and visible bodies of the party. This is our opportunity to put women forward on issues they are familiar with. One of my main commitments in this campaign is to open up shadow cabinet positions to all party members on an equal basis.

Since the shadow cabinet and executive council are much smaller than the team of candidates, it is possible to achieve gender parity in these party bodies.

3) Promote special initiatives and projects presented and managed by women.

Often at the Green Party, women and their ideas for special initiatives and projects have often been put aside. This must change. The way to do this would be to encourage and support women-led and female-led initiatives and promote them on the party’s Facebook and Twitter pages in addition to sending them to members by email.

4) Create a recruitment campaign for women, by women.

This campaign could be composed of videos and letters to be posted on the web. They would be based on the testimony of party candidates and activists and political life in general, which would demonstrate the positive value of getting involved in the Green Party.

In this campaign, we will be able to explain the party’s openness to women, and the proactive measures in place to encourage and support their participation. We could also explain the measures already in place with regard to gender parity.

5) Set aside 60% of the designated campaign funds for female candidates.

During the next elections, we will be entitled to a significant allocation of public funds from the Chief Electoral Officer. Of this amount, a certain percentage should be reserved for local applications. I propose to set aside 60% of these funds for women candidates in winning counties.

Women often do much more unpaid work than men. In addition, childcare often falls under their responsibility. This could sometimes prevent their involvement in political parties, the labour market and their social life. In our platform, we also propose to recommend measures to reconcile work and family.

This is a gesture that will allow many more young parents, men and women, to get involved in the party, and will make our training more egalitarian and more balanced.

7) Appoint a mediator, who will ensure the good conduct of the activists.

This person will take care of punishing members if they make remarks that are disrespectful, sexist, or inappropriate towards women or any other party member.