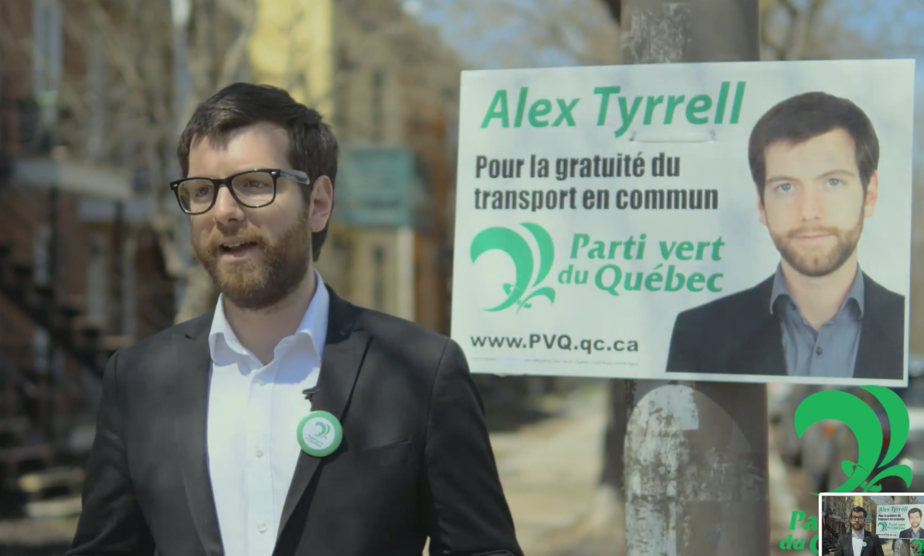 Saturday, April 29, 11:00, Beaubien metro, Alex Tyrrell, leader of the Green Party of Quebec (PVQ) will announce his candidacy in Gouin. At the age of 29, he has just completed a bachelor’s degree in Environmental Sciences at Concordia University. Elected GPQ leader at the age of 25, he is well acquainted with the student reality and was very involved in the 2012 student strike.

“This by-election will be the first election since the party officially adopted a federalist position. This election will be an opportunity for us to demonstrate that the sovereignist movement does not have a monopoly on the left. For too long, progressive and federalist voters have been forced to vote for the Quebec Liberal Party. This era is now behind us, only the Green Party of Quebec offers a progressive federalist alternative. ” – Alex Tyrrell, leader of the GPQ, candidate in Gouin.

Since the election of Alex Tyrrell as leader of the party in 2013, the party has taken an eco-socialist turn in order to position itself on the left side of the political scene, offering a comprehensive program that defends the protection of the environment, but also the public health system, access to education and the redistribution of wealth.

“The voters of Gouin are fed up with the austerity measures of the Couillard government, which does nothing for schools, CHSLDs and public infrastructures that are falling apart. While Quebecers were expecting improved public services, the Liberal government has instead opted for a violent austerity policy by slashing the state, while giving big gifts to the rich, multinationals and the mining industry. The time has come to put the interests of citizens back at the heart of all decisions made by the government. “said Mr. Tyrrell

This election will also be an excellent opportunity to debate the future of Quebec with young people from all political parties. To date, all candidates are under 30 years of age. “I can’t wait to debate with Gabriel Nadeau-Dubois and Jonathan Marleau! “concluded the leader of the Quebec Greens.

Great coverage of the Gouin by-election this evening on CTV News Montreal!