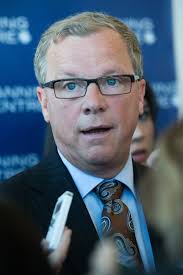 Not only does the oil industry already receive billions of dollars every year in taxpayer subsidies but it is becoming increasingly clear that the tar sands are NOT economically viable without extremely generous corporate welfare.

This corporate welfare takes on a monetary form but it is also delivered in the form deregulation and the imposition of extra weak environmental regulations.

The Canadian oil industry was a bubble. It has now burst and the solutions lie in economic diversification. Not more government handouts to a failing, toxic, unsustainable and unethical industry.

I really hope Brad Wall looses his re-election campaign in Saskatchewan. His divisive comments with respect to Québec,…