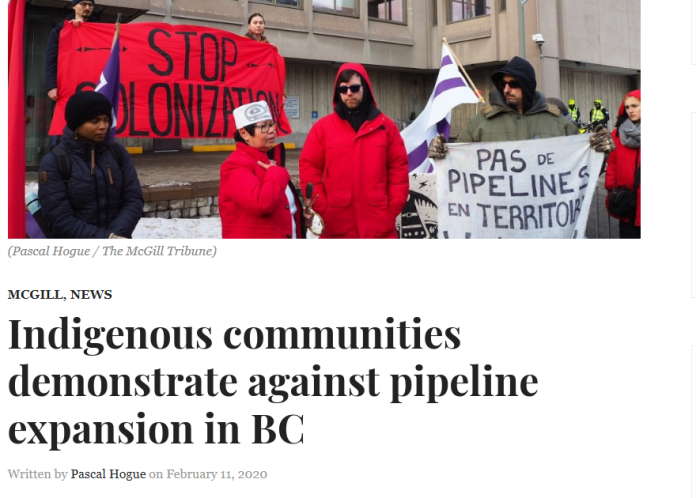 « Around 150 activists and citizens of Kanesatake gathered by the steps of Montreal’s Royal Canadian Mounted Police (RCMP) offices in Westmount on Feb. 2 to demonstrate against pipeline expansion projects in northern British Columbia’s (BC) Wet’suwet’en Nation. The demonstration started early in the morning in Kanesatake territory as a rolling blockade and slowly made its way to the RCMP offices, where the larger protest took place. The event was co-organized by Extinction Rebellion (XR) Quebec’s McGill and Concordia chapters and La planète s’invite à l’Université.

In a show of solidarity with Wet’suwet’en, activists held up flags and signs demanding a peaceful termination of the TransCanada Coastal Gaslink pipeline project. Some even carried eviction notices demanding RCMP officers to withdraw from Wet’suwet’en region, condemning their presence as an “illegal invasion of unceded territory.”

In a scathing speech, Marlene Hale, a member of the Wet’suwet’en Frog Clan, denounced Prime Minister Justin Trudeau’s lack of action against pipeline construction in the region.»